Here are the documents that every Georgia citizen should know

The Constitution for the United States 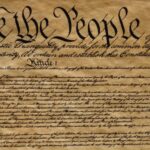 THE Conventions of a number of the States, having atthe time of their adopting the Constitution, expresseda desire, in order to prevent misconstruction or abuseof its powers, that further declaratory and restrictiveclauses should be added: And as extending the groundof public confidence in the Government, will bestensure the beneficent ends of its institution.

The Constitution of the State of Georgia 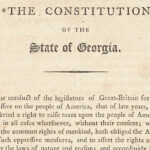 To perpetuate the principles of free government, insure justice to all, preserve peace,promote the interest and happiness of the citizen and of the family, and transmit to posteritythe enjoyment of liberty, we the people of Georgia, relying upon the protection andguidance of Almighty God, do ordain and establish this Constitution.

The Official Code of Georgia 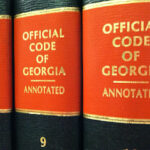 Rules and Regulations of the State of Georgia 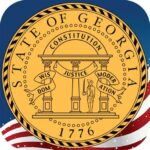 Rules of the State Election Board 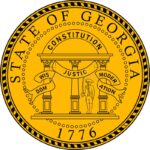 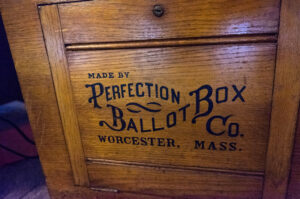 Duties of the Secretary of State 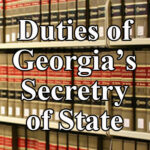 The Secretary of State shall have the following duties:
(1) To keep the great seal of the state, which seal was adopted August 17, 1914, and is now on deposit in the office of the Secretary of State;
(2) To keep the original Acts passed by the General Assembly and all the public records of the state not appertaining especially to other offices; to look to and preserve the records and papers belonging to the Senate and the House of Representatives; and to see that the original journals of both houses are deposited and kept in his office;
(3) To attest all grants and other public documents issuing from the Governor and requiring the great seal of the state;
(4) To keep a record of all grants issued by the state;
(5) To keep safely all bonds of agents appointed to disburse public money;
(6) To furnish to all applicants, upon the payment of the prescribed fees, copies of all records and public documents within his office and to attach the great seal of the state to such transcripts as the Governor or General Assembly may direct;
(7) To destroy, quadrennially, all election returns of those officials whose terms of office have expired, which returns are on file in his office;
(8) To keep a book showing the dates when commissions were issued for all civil and military officers;
(9) To keep safely all the records of plats of land granted and to report the condition of such records to the Governor at least once a year;
(10) To keep in his office correct maps of all the different surveys (made by state authority), and maps of surveys comprising the land lotteries, showing their division into numbers, districts, sections, and the like, with a separate map for every district;
(11) To keep a register of the various grantees and the dates of the grants;
(12) To keep correct maps of all surveys of rivers, harbors, swamps, or land, which surveys were made by the special direction of the General Assembly;
(13) When necessary, to contract for the execution of new maps or the reexecution or repair of old maps, subject to the ratification of the General Assembly;
(14) To certify under his official seal, as the comptroller general is directed to do;
(14.1) To promulgate a regulation that establishes security protocols for voter registration information maintained and developed by the Secretary of State pursuant to Code Section 21-2-211 and 52 U.S.C. Section 21083. The regulation shall be generally consistent with current industry security standards, and in promulgating the regulation, the Secretary of State shall consider those security standards issued by the National Institute of Standards and Technology, the Center for Internet Security, and the federal Election Assistance Commission. The Secretary of State shall, at least annually, certify that the State of Georgia has substantially complied with the requirements of the regulation promulgated pursuant to this Code section;
(15) To print and distribute current maps describing the boundaries of congressional districts and the legislative districts of members of the Georgia Senate and House of Representatives; and
(16) To perform all other duties which are required of him by law or which necessarily attach to his office.

Registration with Secretary of State of trademarks or service marks, § 10-1-440 et seq.

Designation of Secretary of State as commissioner of securities, § 10-5-10.

Service by Secretary of State as ex officio corporation commissioner, § 14-5-20.

Authority of Secretary of State to challenge qualifications of candidates for federal and state office, § 21-2-5.

Powers and duties of Secretary of State relating to elections generally, § 21-2-50 et seq.

Powers and duties of Secretary of State regarding professional fund raisers and solicitors, T. 43, C. 17.

Citations of O.C.G.A. codes violated by Dominion and Election Supervisiors

O.C.G.A. § 21-2-300(a)(2). The statutory provisions mandate voting on “electronic ballot markers” that: (1) use “electronic technology to independently and privately mark a paper ballot at the direction of an elector, interpret ballot selections, communicate such interpretation for elector verification, and print an elector verifiable paper ballot;” and (2) “produce paper ballots which are marked with the elector’s choices in a format readable by the elector”

O.C.G.A. 21-2-344 (2019 version) as that statute makes the election superintendent THE FINAL AUTHORITY (notwithstanding any other statute and it still does) to determine whether to use the Dominion system or paper ballots

O.C.G.A. 21-2-2(7.1) prohibited from having a “computing” function It is logically impossible for a BMD to take the elector’s input and translate that data into a graphic image in the nature of a “2D barcode” without a software routine or subroutine capable of making that computational translation into a printable graphic image which is placed on the face of a ballot.

“It has long been the rule in this State that where there is no authority to hold the election, or where statutory requirements pertaining to the holding of an election are not complied with, the election is void, …”

That Honorable Court went on to say, citing precedent, that elections held in violation of mandatory statutes, in total disregard of the statutes, “…it can not be treated as an irregularity, but it must be held and adjudicated to be cause for declaring the election void and illegal.”

The governing authority of any county or municipality may, at any regular meeting or at a special meeting called for the purpose, by a majority vote authorize and direct the use of optical scanning voting systems for recording and computing the vote at elections held in the county or municipality. If so authorized and directed, the governing authority shall purchase, lease, rent, or otherwise procure optical scanning voting systems conforming to the requirements of this part.